The Champion of Georgia

Georgia National Federation of Billiard is going to organize many sport tournaments in this year.

Congratulations for Georgy!
We hope we will see him on tournaments organized by EBC.

International Committee of Pyramid is planning to organize a big pyramid tournament in Croatia in 2012.

Once again Polish Billiard Association and Mak Marketing Company organized a gala meeting in order to summarize the recent billiard season in Poland.

The title of “Ukrainian Absolute Champion” in 2011went to 7 competitors. 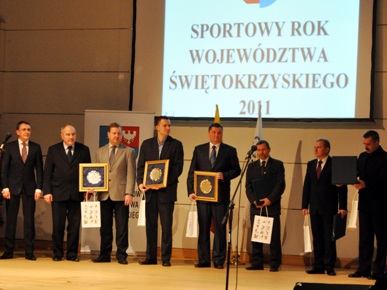 Award from the Marshall of Swietokrzyski voivod.

The Marshall of Swietokrzyski voivod awarded biliard players and organizer of biliard events during the Sports Gala in Kielce.

The main aim of this event was to remind of the best sports moments in Swietokrzyski voivod, achivements of the sporstmen and organizers from the region. The World Junior & Wheelchair Championships 2011 were announced to be the the event promoting the region and terefore the Tournament Director - Marcin Krzeminski received the awar. The diplomas with words of appreciation were handed over to Radoslaw Babica, Oliwia Czupryńska, Katarzyna Wesołowska, Karol Skowerski, Bartosz Rozwadowski and the trainer of biliard team - Nosan Kielce - Marek Karlikowski.

In a final match he defeated M. Immonen, the world champion, 11:8.

“Mika was ineffective in breaking and in the first part of the match he made two mistakes. I was breaking very well and it gave me an advantage.

Finally it was enough to win” said the winner. The 3rd place took ex aequo R. Chinakov from Russian Federation and A. Kasakis from Greece. Generally 56 billiard players took part in the tournament. Beside the finalists, the well-known among the competitors were the European Champions: S. Cohen (FRA), K. Stiepanov (RUS), S. Tot ( SRB), I. Putnik (CRO), T. Kapłan and R. Babica (POL).

The prize money amounted 35.000 €, from which the winner received 7.000 €. It is proper to congratulate the organizers - Moscow Confederation of Billiard Sport, that in spite of smaller amount of players (at first 128 players assumed), they paid all awards included in regulations.

“Fast as a bullet” performed by the Weekend Company

Tables were set inside the Olympic Stadium in Moscow. Congratulations!!!

Dennis Orcollo from the Philippines has become the 2011 WPA Player of the year.

It is an amazing thing that the man, Dennis Orcollo, who for a big part of his life was a fisherman in a distant part of the Philippines, has recently became the World Pool and Billiard Association(WPA) 2011 Player of the Year.

The Philippines has scored a total of 2570 points in 8 WPA ranking during all the year and that’s what gave him leading in world rankings. The second place fell to Yukio Akagariyama from Japan who won the World 9-ball Championship in Qatar in June and collected 2382 pts. Darren Appleton from UK took the third place with 2256 pts. The Philippines Ronnie Alcano, with 2063 pts, finished in fourth position.

After he had heard that was chosen the 2011 WPA Player of the Year, Denis Orcollo was satisfied and said “That’s very good news (…) I’m very happy and it’s a big honor for the Philippines. Hopefully I can continue to play my best in 2012.”