Best Of The East Latest News

Mak Marketing, Billiard Club ARENA and European Billiard Council would like to invite to Dynamic Best of the East 2014
Slovakia  10–Ball Ruźomberok – 08-09.03.2014

The Cup of the East again in Polish hands

Dynamic Best of the East 2013 cycle is finished. Polish player – Mieszko Fortunski from Bandaclub Sky Tower Wroclaw became the best player of the season. The tournaments organized by Mak Marketing Company and its partners took place in Poland, Czech Republic, Bulgaria, Romania and Slovakia. 241 people from 13 countries were classified in the ranking.

„It was difficult but interesting season. I am very thankful my partners for their support and hospitality. Promotion of billiard sport in Eastern Europe is really needful. Dynamic Best of the East is the cheapest and most easily available cyclical competition in Europe. After years of break we came back in 2013 to Czech Republic, Romania and Slovakia. It is our common big success” concluded the director of the cycle – Marcin Krzeminski. 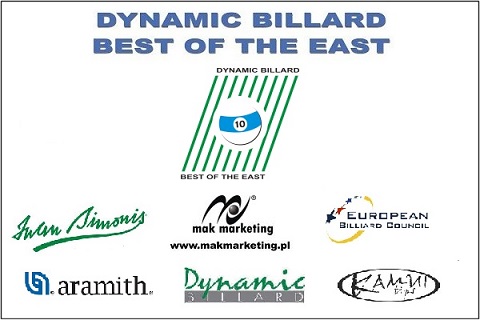 Cristea Ovidiu from Bucharest became the winner of the Black Sea Cup tournament played on 31.08 - 01.09 in City Billiards Club in Constanca (Romania). In a final match he defeated Raul Maikan.

Thanks to A.T.D. Dynamic from Bucharest the players were able to participate in perfectly organized Romania 10 -Ball tournament on 24-25.08.2013. In a beautiful town Busteni placed in mountains the best were players from Poland. Mariusz Skoneeczny became the winner. In a final match he defeated Mieszko Fortuński 7:0. Dr Piotr Ostrowski and Michal Lichodziejewski got the bronze medals.

The cup went to Romania

Cristian Gindać from Romania became the winner of third tournament in cycle of Dynamic Best of the East 2013 played on 13-14.07.2013 in Burgas.

About Dynamic Best Of The East

Series of the tournaments in pool billiard organized in countries of Eastern Europe. The first tournament took place in 1998 starting from the event in Slovakia, Czech Republic and Poland. Later on new hosts of the tournament appeared. In 2002 Best of the East became sanctioned by EPBF and the first official sponsor was Longoni. Since 2003 the series is known under the name Dynamic Best of the East because of the new sponsor - Dynamic Billard Organization from Germany. Second supportive partner is Iwan Simonis - well-known for the production of the billard cloth. Saluc - Aramith (a leader in production of billiard balls) had been envolved in the development of the series till 2009. The winner of the ranking, thanks to the support of the International Billard Promotion, participated in EURO TOUR tournament without entry fee.

Every year (2002-2011) 3-6 events took place in Europe. The sport system was Robin Round + single elimination in 9-ball. This provides each sportsmen the possibility to play more matches than in he double elimination system. In total: 47 tournaments were organized in the following countries: Slovakia, Poland, Czech Rep., Hungary, Lithuania, Ukraine, Bulgaria, Romania, Croatia, Serbia and Estonia. From 2004 the main organizer of the Dynamic Best of the East is Polish company - Mak Marketing.

In 2012 5 new competitions will be held (in Hungary, Czech Rep, Bulgaria, Estonia and Poland), but for the first time it will be played in 10-ball. Everyone can participate in the event under the following conditions: the application must be sent to the Organizer till the indicated date, the participation will be then approved, name of the participant will be placed on the players' list and the entry fee will be paid.

History of the events and results since 2002 on: www.makmarketing.pl